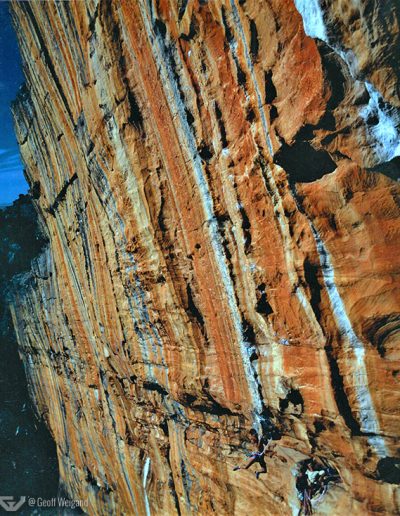 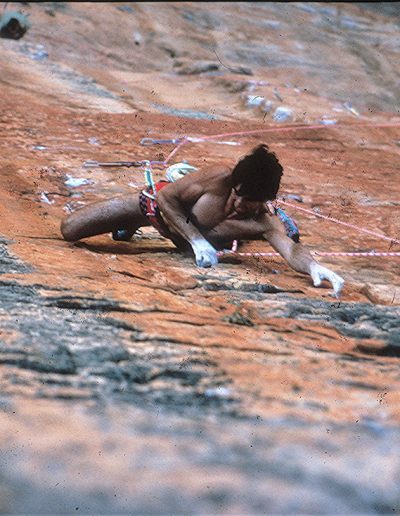 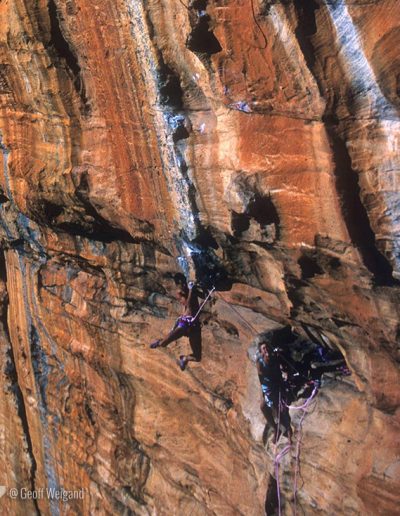 There’s no way around it, Taipan wall is a proud and awesome slash of a golden orange. Smoother than the “Piles” with a very sunny disposition that requires a committed approach for success. Returning home to Oz for a few short weeks in ’89, whilst based out of the US’ premier hard crag Smith Rock in central Oregon, the pressure to be productive was great. Regardless of the middle of the southern summer temperatures – we couldn’t ignore the visionary main effort up the apex of Taipan Wall in the Grampians, cousin to my spiritual climbing home Arapiles.

Taipan wall – It’s not that simple as sauntering over to the crag as at Arapiles, you need willing support. I was fortunate to find that in two then new, now old mates – Dave Filan and Rob LeBreton and an even older one in Mike Meyers. While anyone can perform the mechanics of a belay it’s a different experience with your brothers (or sisters) from different mothers on board.

Typical western Victorian summer conditions with temps cruising over 100 degrees daily, with the route going into the full sun early, we knew climbing time would be thin. With no apparent cold front offering respite in sight and on a tight schedule we calculated an actual “late alpine start” of 4 am, was required. Rob and Dave put their plans on hold for my benefit and agreed to let me drag them out of their bags at that ungodly hour. In all my years living in the pines I’d never warmed up on the boulders in the early dark, apparently with good reason, it’s terrible. Even Peter (Croft) waited for the dawn.

Driving then hiking and finally in the belay pod below the pitch which serpentine around an impending tower at the height of the Taipan. No chalk on the route, pink with sweat even at that hour, under the gun the beat the shade line and the encroaching wall of blast furnace air. While many can perform the mechanics with a belay device it’s an entirely different experience with your brothers or sisters from different mothers on board – my good fortune. With a vault over the crown at the top, next to Mike, his motor drive still whirring away – we all celebrated for the shared effort. I made Rob follow it, just for the experience.

For me, 1st ascents were always prime but sometimes a 2nd reaches almost as far. This was one of those…